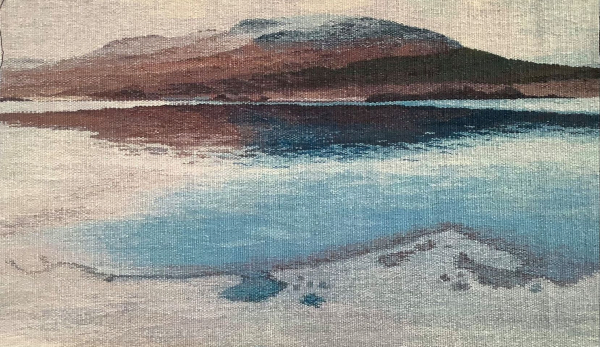 Tapestry in its own words: what is the native language of tapestry and how can we best design for it?

The first tapestry I wove as an independent artist was from a complex landscape drawing. I wanted to weave the piece without making use of the translation techniques I had learned whilst weaving the Henry Moore drawings. I wanted it to look like a tapestry of a landscape and not a tapestry of a drawing of a landscape. The lines should make patterns rather than woven drawn lines and they should represent something physical in the landscape - the paths made on the hillside by grazing sheep.
Tapestry has many unique qualities and for me, one of the most exciting and one I use all the time, is the ability to mix different thicknesses of threads and colours in the weft bundle. Depending on whether the colour or tonal contrasts in the bundle are wide or close, a large number of visual effects can be achieved without any complicated weaving. These days I like simple weaving and get frustrated if I find myself fiddling on three warps for any length of time.
Thirty years ago I was making pieces that mixed realism with the decorative. Although the subject matter was nominally landscape, I was developing a number of themes or archetypes – water, boats, fish and birds - that followed the narrative through several tapestries.  I also developed a vocabulary of marks that I used in most of my tapestries then – dots, dashes and fine diagonal lines.  These marks could become many different things depending on how and where I used them. An area of two- and three-warp wide dots could represent a cloud of midges or highlights in a wave or something non-specific, and whatever the viewer chose to see into it.
The designs for these early pieces were usually painted or mixed media. I could never get what I wanted in just one drawing so I would usually be taking bits from three or four.  I was quite interested in woven frames as an important part of the composition then. I liked how a rectangular or partial frame allowed the tapestry to breathe – giving it an intermediate zone between the action in the tapestry and the wall it hangs on. Later in my boat pieces the frame was concealed within the curving lines of the compositional structures that I liked at that time.
In the last few years of the 20th century, I wove a series of large commissions. This showed up a design dilemma for me. Obviously the commissioning client needs have a good idea of what their finished tapestry will look like, so I had to prepare detailed drawings. By then I had begun to believe that the more finished the design, the more boring the tapestry. A minimal design, gives more scope to develop the tapestry as I weave it, in exciting and unexpected directions.  If there is already a fixed, finished drawing, why spend months weaving it? A tapestry should only be woven if it cannot exist in another medium and the medium should somehow be intrinsic in the design from the start. My tapestries are so much better if most of the designing happens during the weaving but is a hugely risky approach.
Since I moved to the Far North I have become increasingly interested in weaving my immediate landscapes and their stories, starting out with my research into the effects of the Highland Clearances of the early 19th century. I set out to create an installation of long thin pieces each representing a lost village in my parish, a ridiculously ambitious project but one that required me to work in a much looser, quicker way. I used tie-dyed wool warps, leaving some areas unwoven and included strips of my own photographs as weft in places also. This project was a bit of a catalyst in my approach to design. The long thin pieces were woven without a design, only guided by my memories of the landscapes in the colours and shapes dyed into the warp, so I was allowing the weaving to tell me what to do next. This felt a very natural way to work, idea building on idea as I wove.
Later on the tying and dyeing of the warp became the main design process for several big pieces. I have continued to work this way occasionally as I enjoy the combination of some precision with plenty of surprises, and I like leaving parts of the warp visible as a reminder of the structure – the warp as skeleton.
Mine is a continuous search for a way to design for tapestry that is truly appropriate to the medium.  To me designing on paper is unhelpful, pencil or paint creates too many complexities too early in the process. Tapestry is not about lines and negative spaces it is about shapes. Collage, being about area is better – and quicker. I try to start with very small, very simple compositional relationships. Where is the horizon where is the eye level?  What are the important colour relationships?   Then I start sampling. Once I am actually weaving I get better ideas but I have to have some inkling of what questions to answer through the samples. What warp and sett?  What weft? What colours do I have and what do I need to dye?
What I am always trying to do is to make work that has to be woven into existence. I can’t draw it or paint it. I can’t even really think about it properly before I start weaving it. The closest I might get would be in a few carefully chosen words that describe the mood I am trying to capture.  This is the truth when we say tapestry is a narration, it is me, the weaver, telling myself my own story as I weave.
I would be really interested to hear other views on these observations.
Joan Baxter

Paulette, 2nd Jun 2021
Interesting what you say about design. I’ve been struggling for over a year to get an image down on paper for a tapestry that is so clear in my mind. In the last few weeks I’ve decided to just go for it and trust my weaving instincts. It slightly goes against what I’ve picked up about doing lots of planning beforehand but I feel full of enthusiasm to see where this will take me. Probably an unexpected place, but I think the journey will be interesting!

Eleonora, 5th Apr 2021
Just what I needed! I’ve come back and read your words several times and now I know precisely what I want to weave. I have had this loom where I can weave up to one metre wide for a few months – up until now the widest I’ve woven is 50 cm. I was a bit stuck for an idea to fill such a large space. I usually use a cartoon, but I am not averse to changing it, or even improvising some elements of a tapestry. Mostly, when I change something, I will draw a cartoon of that bit anew. Seldom have I let loose and just let the flow take me. The one prevailing thing is the narrative. That is always there, whether it is me telling it or the tapestry telling me. I read a book once, long before I even thought of tapestry weaving, where one of the characters was a weaver. Her name was Becca Weaver and as she wove the characters in her weaving came to be. I have no idea what the tapestry will look like when it is done, but I will start with the roots and work towards the sky. I will probably do some sketches and maybe even a cartoon. Thank you for the inspiration.

Anna Wetherell, 3rd Apr 2021
Fascinating, Joan - thank you! I keep pondering (struggling) with where to start with designing my tapestries. I enjoy working by instinct, perhaps guided by photographs or images but without a cartoon or specific plan. I also work with a cartoon at times. My confidence in my painting, drawing etc skills are lacking, so that requires a deep breath to make a start that way anyway! I would like to be able to explore ideas on paper, however, whether that results in a cartoon or not, and whether it is an image I then work from or simply a way of developing concepts and options. Collage - something else to explore! Hmm - so many options... I suppose it is a case of finding ways that work for each of us, and accepting that they may evolve over time &/or adapt to the project in hand. Much to explore anyway!

Lorna Morrish, 1st Apr 2021
I too often abandon my original sketch and weave spontaneously. I use ideas in my head rather than a visual plan

1st Apr 2021
Thank you Joan for such an honest, helpful and refreshing article. I begin designing by working from a drawing, photocopying and collage. I find the process ultimately frustrating and end up putting it away. Having done my colour samples I just begin to weave. Whether I have had to go through this design process in order then to work intuitively I don't know. But I do my best pieces when I abandon my designing and get into my materials. I can't plan colour on paper either. I have to handle and get to know my yarns through touch and experimenting with colour combinations.

Michele, 31st Mar 2021
Wow! Thank you so much for this lovely, enlightening, and encouraging essay.

Rena, 31st Mar 2021
This article is wonderful to read. It has answered so many questions I’d had about the design process for weaving. Thank you so much, Joan